HP announced a versatile lineup of PCs and PC-shaped things on Monday (Taipei time) at Computex, embracing the new normal in the world of PCs—which is, nothing’s normal. 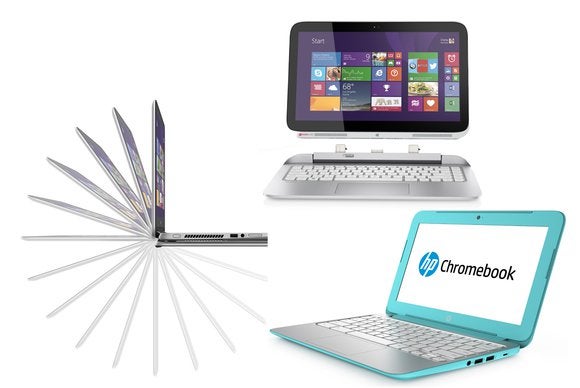 A year ago, the PC diversification drive was just getting started, but now it’s in full swing. You want a laptop that can flip over with a 360-degree display hinge? HP’s got one. What about a laptop that can split in half? HP’s got one. Or maybe it looks like a laptop, but it runs Chrome or Android—HP’s got some of those as well. It’s also got plain ol’ Windows laptops and PCs, but that’s not where the excitement is anymore.

Let’s start with the hottest trend, which is notebooks that can flip all the way over to turn into a tablet, following the lead of Lenovo’s Yoga series. HP debuted the Pavilion x360 with a full-rotation hinge at Mobile World Congress in Barcelona. Now it’s got more fleshed-out specs, plus a fancier version that will carry HP’s Envy moniker.

The Pavilion x360 will have a 13.3-inch touch display and your choice of graphics-oriented AMD A6, A8, or A10 CPUs, or more battery-efficient Intel Core i3 or Core i5 CPUs. Speaking of battery life, HP specs it at up to 8.25 hours with the Intel chips, but up to only 6.25 hours with the AMD chips.

The Envy x360 will be physically bigger than its Pavilion cousin, sporting a 15.6-inch display, a heavier 5.8-pound weight, and Intel Core i3-i7 processors. It’ll be configured with up to 8GB of RAM and up to 1TB of storage, including a hybrid option. Silver will be its sole case coloring. HP says the battery will last up to 7 hours. HP did not specify a ship date, but the price will be $680.

HP built several improvements into the new Split x2 hybrid, including a fanless design. Thanks to the advent of thinner hard drives, HP was also able to shift the main storage from the keyboard side to the tablet side, so users won’t be separated from their data regardless of the mode.

The Split x2 configurations will offer Intel Bay Trail and Haswell CPUs, 4GB to 8GB of RAM, and up to 500GB of hybrid storage. The 13.3-inch tablet side weighs 2.45 pounds, but the full unit with keyboard attached weighs 4.3 pounds. The tablet alone lasts 5.25 hours per HP’s spec or 7.75 hours with the keyboard (which has its own battery) attached. Colors will include white, silver, and red. The Split x2 will be available July 16th for a starting price of $600.

Less than a year after HP debuted the Chromebook 11 (with 11.6-inch display) it’s giving the line a look more similar to that of its Chromebook 14 cousins (with 14-inch display). Gone are the shiny white and classic black of the original version, designed in collaboration with Google. The new Chromebook 11 will come in Ocean Turquoise or Snow White.

PC-shaped Android devices popped up at Computex in 2013, and a light trickle of models has come out since then. A recent roundup of Android AiOs shows how vendors are still experimenting with this fairly new concept.

HP introduced its Slate line of Android products last year, starting with a tablet and an All-in-One. This year, a new SlateBook delivers the Android experience in a clamshell design whose black and “sweet yellow” accents make me think it should be called SlateBee. The 14-inch Full HD touchscreen device will be driven by an Nvidia Tegra 4 chip and contain up to 2GB of RAM, and up to 64GB of storage. It will weigh a toteable 3.71 pounds. HP says the battery will last up to 9.25 hours. The new SlateBook will ship on August 6 for a starting price of $429.

I’ll give HP credit this year. It’s been playing catch-up in developing products for a new generation of users. The products it’s unveiled at Computex show that it’s assertively developing even fairly new product lines like the Slate Android devices. It hasn’t given up on its Windows business, but it’s responding to users’ restless search for more versatile form factors and tablet-like talents.

What do you think—is HP innovating, or is it straying too far from its PC roots? Let us know in the comments.

Correction: Due to erroneous press information, the price of the HP SlateBook was corrected from $399 to $429. PCWorld regrets the error.