Microsoft will close and end the preview of its new GigJam productivity service, which was aimed at helping teams of people collaborate in real time over the Internet, the company said Tuesday. 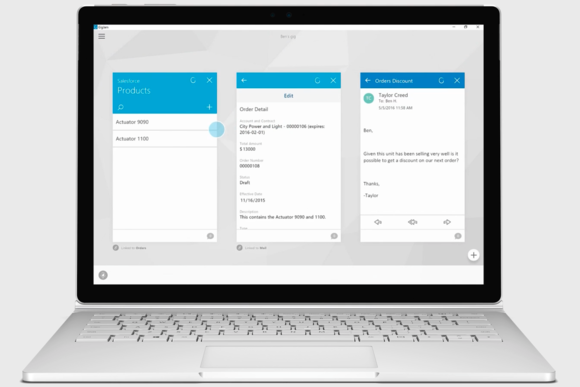 “After careful consideration, we’ve decided to retire the GigJam Preview on September 22, 2017,” Microsoft said. As of that day, any remaining “gigs” will automatically expire.

GigJam combines data from a variety of services including Microsoft’s own Office 365, Trello, Dropbox, and Salesforce. Users can then bring that information into a shared workspace, or “gig,” allowing them to quickly work together.

Users can easily redact part of the information they’re sharing with other people, meaning they can selectively share only what needs to be seen in order to get a job done.

There’s no way around it: GigJam was a kind of wacky product Microsoft has built to help people get work done together. But what’s interesting is that it’s emblematic of the company’s current approach to the productivity market—focused on letting people quickly and independently collaborate across different services while maintaining a secure environment.

Here’s how it works: One user starts a “Gig,” and then pulls in information from whatever services they need, like email, Salesforce, Office documents, and Asana tasks. That information shows up as a card inside GigJam, where users can highlight some information inside a card, redact other information, and then send the whole bundle off to another user for review or editing.

It’s a good way to both keep focused on the task at hand (like editing only one slide out of a PowerPoint presentation) and also enables workers to more easily team up with people outside of their organization, like suppliers and contractors who shouldn’t be privy to some information.

The GigJam interface also combines a bunch of interesting input methods. Users can work entirely with the keyboard and mouse, but they can also interact with Gigs using touch and voice input. The service is a crazy bundle of different modern capabilities and looks in demos like something out of the future.

GigJam’s radical differences from other collaboration products like Slack, email, Yammer, and SharePoint are what make it unique and powerful, but may also end up being its undoing. Plenty of companies have bet on innovative productivity services that ended up being less popular than expected. The epic failure of Google Wave comes to mind.

GigJam is available on Windows and Mac, with a beta of the iOS application coming soon. Users can sign up for the private beta here, and Microsoft says everyone who requests an invitation will get one. People who have already requested an invitation to the beta before now should have one waiting in their inboxes.